In 1957, partners Lou Aiazzi and John Riganti opened Rigazzi’s on the Northeast corner of The Hill.  Fusing their last names -- Riganti and Aiazzi (pronounced ‘Ozzie’) -- yielded the new restaurant’s name: Rigazzi’s.  The partners were pleased that Rigazzi’s resembled the Italian word ‘ragazzi,’ which loosely translates to mean ‘friends’.  They wanted their restaurant to have a friendly atmosphere; to be a place for making new friends and making memories with longstanding friends; a place where every customer would be treated like an old friend.  A tradition was instantly born.  Before the decade was up, Lou and John decided to end the partnership, and keeping true to the spirit of Rigazzi’s, they parted ways amicably.  Lou and his wife Josie assumed ownership, and the Aiazzi family continues to run Rigazzi’s to this day.

Lou grew up cooking, learning the skill from both parents and grandparents who had emigrated from Northern Italy.  When creating the menu for Rigazzi’s, Lou looked to honor both the new and the old traditions in his life.  As such, Rigazzi’s offers a combination of Northern Italian and American dishes.  Lou was known for his giant personality, his booming laugh and his oversized heart, so when it came time to plate his dishes, Lou served them the only way he knew how: extra-large.  To this day, we continue to serve hearty portions. 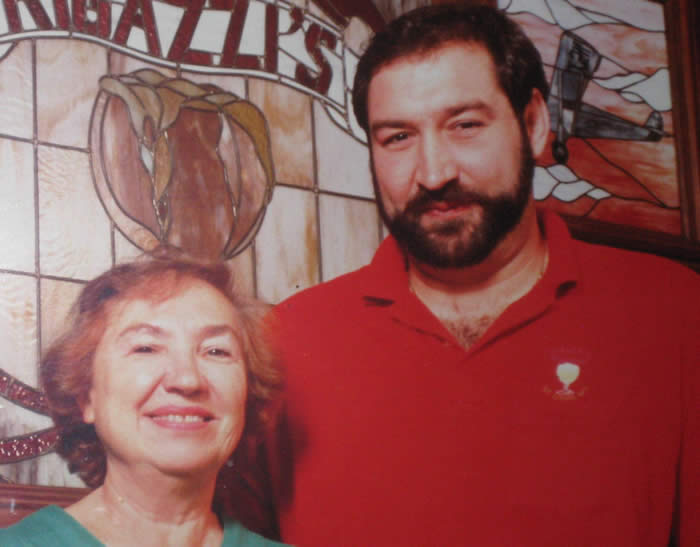 Lou was succeeded by his son, Mark, who began helping in the restaurant as a young boy.  The skills learned in childhood helped prepare Mark for the nearly 40 years he spent as President of Rigazzi’s.  Mark could best be described as genuine and unscripted.  In addition to frozen fishbowls and plates of pasta, Mark served quick wit, sports stats and infectious laughter! Mark never met a stranger and so lived the spirit of Rigazzi’s: everyone was a friend.  In early 2000, Mark expanded and updated the restaurant’s interior.

We are the Home of the Frozen Fishbowl.  Rather than having a signature drink, we have a signature drink glass!  A fishbowl is a 32 ounce frozen goblet that can accommodate any drink of choice, but is most often filled with beer.  The fishbowls were modeled after the ice cream dishes used in the 1904 World’s Fair.

We are known for our toasted ravioli, which are handmade daily and a customer favorite!

We are the oldest restaurant on the Hill; many have come and gone, but we are still here and we are enthusiastic about staying!

We are located at the corner of Daggett and Boardman in a building that was built in 1901 and originally used as a house.

We are dedicated to providing unique and delicious dishes, made from only quality ingredients.  We are committed to ensuring that each customer who walks through our door feels welcome and leaves both full and happy.  We are looking forward to seeing and serving you soon!

*The story behind this picture is fun, so we'll share!  In the late '50s, we were the largest seller of Anheuser Busch products in both St. Louis and Missouri.  Anheuser Busch sent the Clydesdales as a 'thank you'!